This time around, the foot rests are constructed and the front fork required a redesign. 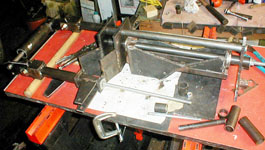