This time around, I start building the front fork. Based on the leading link design, it's best suited for the ~45 degree rake angle. 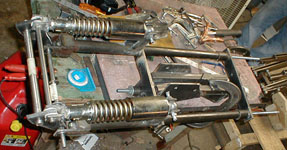