Having the front end rise up is a good idea, in this update I start cutting and building a 'Virtual Pivot Point' front end, comprised of parrellel bars with a particular linkage. This will allow the front cowing to rise up, making it really easy to get in and out of the bike. 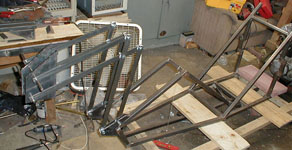