2013 was a year of slow progress and some major life changes, but by the end of it the front end was updated with new CNC parts I designed and machined and our shop got a new HAAS VF2 CNC which I'm able to use and learning to operate. Look for more parts coming off the CNC 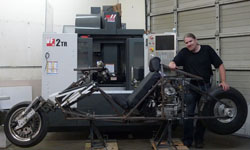