Construction continues, I make some engine mounting brackets, and mount and test the engine 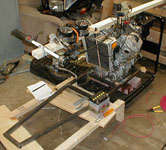