The conceptual founation of the final version of the bike is worked out, with CG renderings and CAD modeling. It's not completely finalized and some aspects will change after prototype testing, but this is a highly accurate representation of what the final version will look like. 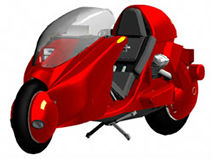