A motorcycle crash, and moving on to casting the rear wheel hub, the largest casting yet. 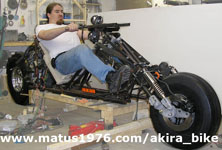