A few new tools added to the workshop. A pro-tools tubing bender and notcher, a miller TIG welder, a Grizzly desktop mill and last a desktop lathe. Then onto the bike where I start work on the rear frame making progress to a rolling chassis. 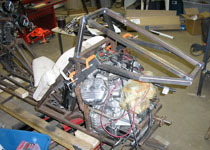