An update to the foot rests, construction of a kiln for aluminum casting, and the addition of a center stand and the right foot controls. 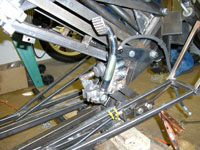