It's coming along. This project takes a lot of work and time. A lot of the design work requires intricate detail, examinations, and re-examinations. Building the various components may present further issues not present in the design (although I try to animate the actual construction of many of the components) Additionally, I am learning much of this as I go along, and many of the tools take time to save up the money to purchase.

When will you be finished?

The developmental prototype will take about 2,000 hours and from $15,000 - $30,000, while the final version will take about the same hours but 3 - 4 times as much money. So how long will it takes depends on how much money I have and how much time is being put in. With 2 people working full time on it, it can be done quite quickly.

How much will you sell it for?

If I end up manufacturing these, as one offs, they will be quite expensive, probably in excess of $50,000. But they will be fast. very fast. None of the mainstream motorcycle manufacturers have anything remotely like a recumbent motorcycle. Motorcycle racing rules have arbitrarily banned anything that could ever even remotely resemble an Akira Bike, and manufacturers shy away from things that can't race (and thus can't win) If you ever want to see an Akira inspired motorcycle on the road, or for sale, consider supporting this project.

There is much discussion online about the technical details of Kaneda's bike, but since it is only a movie, and this is also not the future, I will not be using superconducting electromagnetic motors in the hub of each wheel, and sparks will not fly out of the rims of the wheel (maybe in a later version, as I have experimented with superconductors!) I am frankly going to ignore all the technical references to the power and drive-train in the film, and will be making first and foremost a functional, safe, drivable vehicle, and secondly one that looks as much as possible like Kaneda's bike from Akira. Currently however my final design incorporates a 120HP  engine and should perform quite well.

What are you using for tires?

What will you be making the body out of?

Why aren't you making it electric powered?

There are no practical powerful light electric motors that cost any reasonable sum of money that I could use in the design, and more importantly, batteries simply don't have the energy density necessary. A typical battery stores about 120 Wh/kg, while gasoline stores well over 12,200 Wh/kg. I do not believe electric vehicles will be popular until there are some major advances in battery technology (in excess of an order of magnitude)

What are you using as an engine/power system?

The first prototype is using a 500CC tranverse V-TWIN from a used 1985 Honda, at about 45 HP, though I am hunting for a CX650 Turbo, which is about the exact same size and puts out 75HP. The final version will use a more powerful motor, 120HP is the current design.

How can I help?

3 - Technical advisors. I do need some technical advisors, primarily in the area of composite body work fabrication, Finite Element Analysis, and Metal working (welding, machining, and sheet metal forming) Most of the areas I have taken upon myself to learn, but that obviously takes more time than shooting a question off to someone all-ready knowledgeable in the field.

4 - If you live in the Seattle area, come and help out. I always need technical and machine minded people, motorcycle enthusiasts, weldors, machinists, people experienced with composite construction... Or anyone just interested in lending a hand!

So far I have received virtually no assistance on this project, outside my immediately family who have been immensely supportive. If you are interested in the project and have any of the skills but figured I all ready had some help, I actually do not, so please feel free to contact me.

What is your Drivetrain?

Some of the information of my design is going to be kept confidential until I test it. I do not want anyone killing themselves on what might be a bad idea on my part. For that reason I will not elaborate one what types drive-train I am using, yet...

How fast will it go?

Using motorcycle designer Tony Foale's performance analysis software with some reasonable approximates on the final versions coefficient of drag, rolling resistance, and weight bias I believe the bike will rival the fastest production bikes on the market in both acceleration and top speed (Hayabusa ranges)

What is the Wheelbase?

The current design has a wheelbase of 110", this will shorten significantly after prototype testing is completed, but will still be significantly longer than conventional motorcycles

How heavy is it?

The prototype will be severely over-engineered, and so will be very heavy. I would wager a guess at 900 - 1,000 lbs for the prototype. The redesigned version should be more reasonable, at 500 - 600 lbs

Will the front fairing turn when you steer?

This is yet to be determined, it appears in the film that it does, although it is difficult to tell, it definitely is part of the unsprung mass of the front of the bike (as in some scenes it vibrates significantly as if moving with the motions of the front axle) The large determining factor however will be where the center of pressure from side winds ends up being after the design is completed. If the CoP is above the steering axis, a strong sidewind will steer the vehicle into the wind, in which case it would make sense to have the Fairing attatched the the fork. However, if the side CoP is below the steering axis, a strong sidewind will turn the fork into the wind, countersteering the vehicle into the opposite direction, creating a destabalizing effect. If that is the case, the Fairing will be frame mounted. Additionally, the canopy glass would interfere with the handlebar turning if it was frame mounted, so I may make an effort to make sure the CoP is above the steering axis and make it rotate with the handlebars, though it will not be part of the unsprung mass of the vehicle. Right now the design has it not moving with the steering input.

Where is the Engine?

Just behind the drivers seat back.

You should make your frame out of round tubing.

I should, I opted to start with square tubing as it is easier to work with and learn on.  Additionally, manufacturs are primarily concerned with cost of manufacturing, and can use less round tubing and make a stronger frame. As I am over engineering the frame, it will probably be strong enough, and resembles more of a racing roll cage frame than a motorcycle twin spar or tubular backbone frame. But this is just a prototype. The final version will be constructed out of 1" - 1.125" seamless DOM 4130 round tubing, I all ready have the tube bender, notcher, and TIG welder.

Will the front cowling rise up?

Absolutely, this is one of the coolest aspects of the Akira Bike design, and I have expended considerable effort in replicating this effect, I also think it provides a useful functional assistance in getting in and out of the motorcycle. 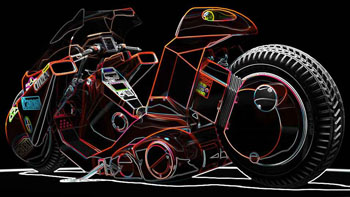 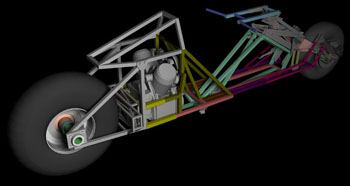 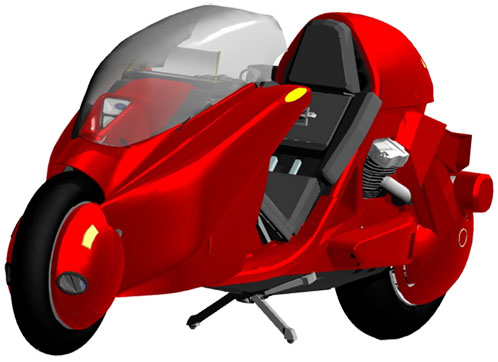 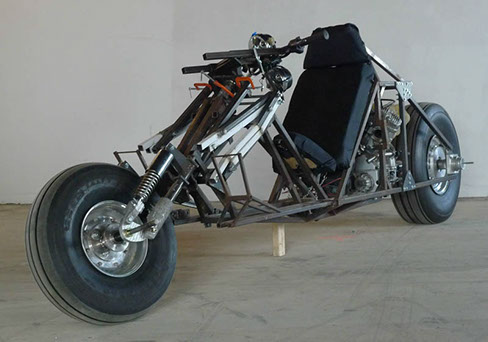 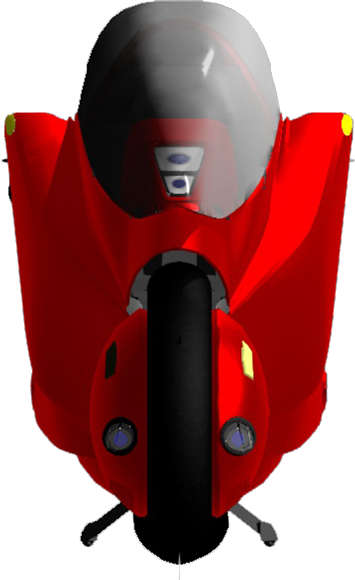 Email if you have a question that's not here 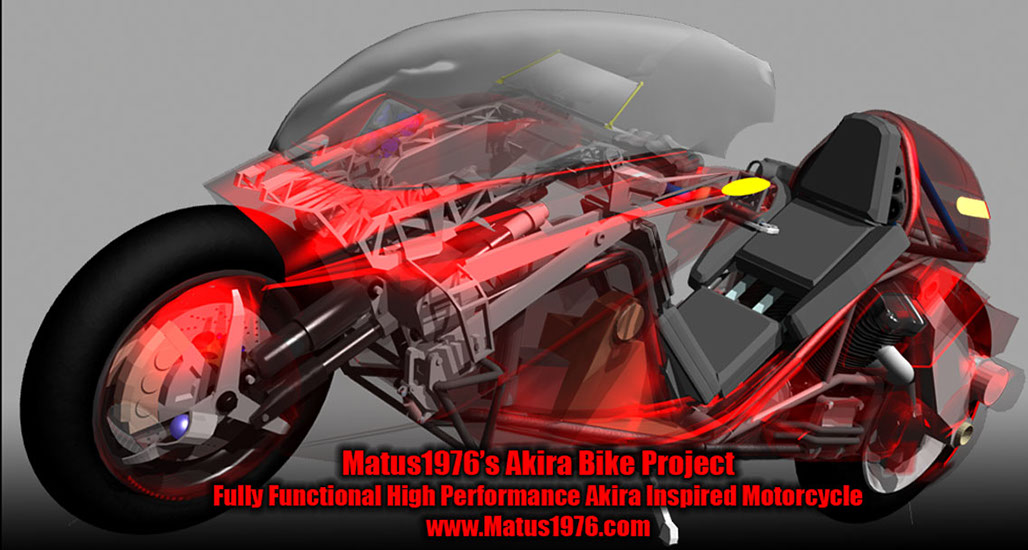